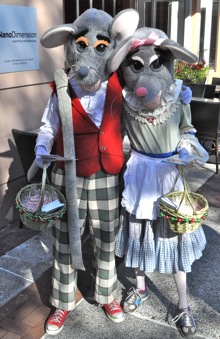 A couple of mice were spotted sauntering along Santa Cruz Avenue this morning. When stopped, they explained they were promoting  the upcoming performance of ‘Twas the Night Before Christmas.  An auditioned cast of 100 Menlo Park Academy of Dance students and  company members of Dancers Repertory Theatre – a nonprofit founded in 1969 – combine to perform the Clement Moore favorite, adapted for the theater with original choreography by Jeannde Herst. The Academy of Dance studio has been a fixture on El Camino in Menlo Park for 60 years,  50 of those years under “Miss RoseAnn” (RoseAnn Sayler) who retired in 2001; it’s now owned by Sara-Jane Measor and Sylvia Duncan.