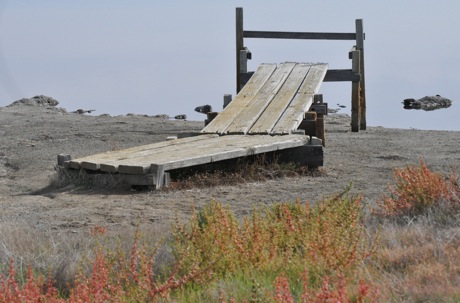 The parking spots were filled and the trails were busy with walkers, joggers and cyclists this Thanksgiving morning at Bedwell Bayfront Park, which at 160 acres is Menlo Park’s largest park. Located at the foot of Marsh Rd. and surrounded on three sides by the Don Edwards San Francisco Bay National Wildlife Refuge, it was once Menlo Park’s dump (or the more sanitized word, landfill). It became open space in the 1980s; methane from the landfill is still pumped out and converted to electricity. A walk around the 2.3 mile perimeter trail, coupled with a scamper up one of its hills, affords great Bay views.

That the park remains as Menlo Park’s only open space is largely due to the efforts of the Friends of Bedwell Bayfront Park, which spearheaded efforts against development plans to replace park lands with a golf course or playing fields. The organization designed three new interpretive panels that were recently installed by the city of Menlo Park, and its website has a cool aerial map of the park along with birding information.