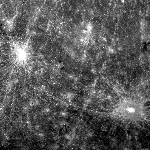 While many (most?) Menlo residents are frantically preparing for the coming holiday festivities (and failing to make full stops at intersections), the scientists at the U.S. Geological Survey (a Menlo mainstay) are sharing their excitement about showing off the 55% of the planet Mercury never before seen. According to  just-released news from USGS:

“When the MESSENGER spacecraft completed its third and final fly-by of Mercury in September, cartographic experts from the U. S. Geological Survey used the imagery captured to complete a mosaic showing the 55% of the planet never seen by humankind.

“The MErcury Surface, Space ENvironment, GEochemistry and Ranging (MESSENGER) spacecraft was launched in 2004 and is the first mission in more than 30 years to visit the planet Mercury. The trip requires multiple ‘fly-bys’ to alter trajectory, slow the spacecraft and eventually enter orbit, which will happen in March 2011. Until then, the new image mosaic will be used to plan image observations for when the spacecraft is orbiting Mercury.

“While the average person may be familiar with the process of creating mosaics by using their personal computer to merge several photos together, there are some significant differences in this case.

“‘The process of making an image mosaic [of Mercury] may seem relatively straightforward,’ said Kris Becker, a cartographer and programmer at the USGS Astrogeology Research Center. ‘However, consider the intricacies of doing this process with more than 800 images taken by a satellite flying by a planet at more than 2,000 miles per hour.'”

So join the scientists, share their enthusiam – here’s your chance to map one of Earth’s neighbors.