UPS cyclist delivers in time for naughty and nice 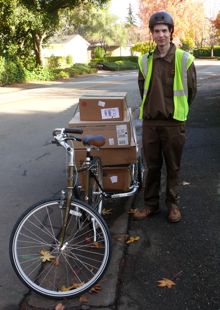 Bruce was a bit startled when this contributor raced across the street to get a photograph. She ‘d heard whispers about these cart pedalers descending on mid-Peninsula residents; an internet search confirmed that UPS was deploying about two dozen in the area.

Writes Mike Cassidy in the San Jose Mercury: “You might think UPS’s bike initiative is a case of Big Brown going green. In fact, bike deliveries are more about saving green. [UPS spokesperson Rhoda] Daclison-Dickey says that in years past the company would rent additional trucks to handle the crush of the peak delivery season.

“‘It was no longer cost-effective to rent these big Budget trucks to deliver packages,” she says. “We had to figure out alternative ways to get people’s packages to them within the time frame we committed to.'” And so, the regional office bought a fleet of bicycles with trailers ($700 per set) to replace the rentals in San Jose, Santa Clara, Sunnyvale, Mountain View, Palo Alto, Menlo Park and Fremont.”

Bruce explained that he picks up packages for his west Menlo Park delivery route from a UPS truck that has an attached u-haul trailer, which is parked in the neighborhood.

It was clear that he didn’t know what all the 21st century fuss was about in regards to an efficient 19th century technology.