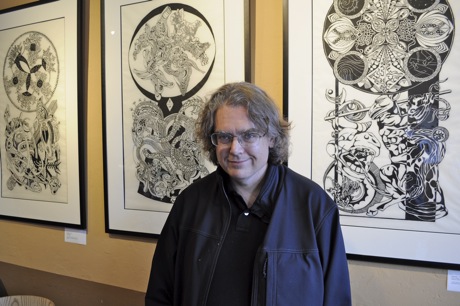 Artist John Cadigan’s intricate woodcuts, which merge mystical themes with ancient symbolism, are currently on display at Cafe Zoe. Cadigan’s work has been exhibited in museums and galleries around the United States, most recently at the Art Gallery of the John F. Kennedy Center for Performing Arts in Washington, D.C. On the Peninsula, the healing chapel at the Church of the Epiphany in San Carlos features two commissioned liturgical relief woodcarvings.

According to an article in the San Francisco Chronicle, Cadigan credits his art with helping him live with schizophrenia, which he was diagnosed with his senior year in college. “The actual art of carving is very therapeutic,” he told the newspaper.

The woodcuts will be on display for the next two weeks.