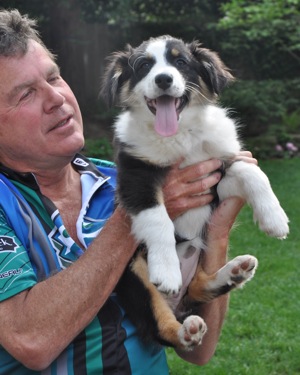 OK, we know all pets are special. But nevertheless we’d  like to learn more about your special pet. Tell us your story – tips [at] inmenlo.com – and you may be featured on InMenlo. Thanks!

If you’ve ever owned an Australian Shepherd – or gotten to know one more than casually – you know they’re different dogs. But that’s the reason for their zealous fan base – and why Lisa and Dana Hendrickson welcomed  their third Aussie pup, Grace, into their Menlo Park home just a few weeks ago.

“We couldn’t live without one,” says Dana (pictured with Grace, now 13 weeks old). They’ve owned two previous Aussies and, like many owners, got stuck on their intelligence and devoted companionship. Adds Lisa: “Aussies want to be with you – they’re so enthusiastic and so glad to see you, even if you’ve only been gone 10 minutes.”

Before Pugs took over the neighborhoods of Menlo Park – or so it appears – Aussies were the rage, seemingly sprouting up every couple of blocks. The fact that they are such a pretty dog and medium in stature undoubtedly led to their increased popularity. While their personality is infectious, those considering this wonderful breed should read the fine print supplied by the American Kennel Club:  “An energetic breed with strong herding and guarding instincts, the Aussie requires daily vigorous exercise. Although sometimes reserved with strangers, they are ‘people’ dogs that want to always be near their families.” (Italics provided by your editorial team not to provide discouragement but so that you know what you are getting into!)