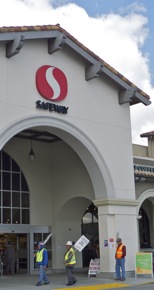 Northern California Carpenters Union spokesperson Paul Cohen says that the dispute arose when Safeway chose a contractor who paid sub-union-standard wages and benefits for remodel work at a Safeway in Contra Costa County. Cohen says that the dispute intensified after a Safeway employee slashed a banner carried by Union pickets at a Safeway in Santa Clara, in response to which the Union filed an unfair labor practices complaint with the National Labor Relations Board. A request for comment from Safeway was not returned.