JobTrain: Offering a hand up, not a hand out 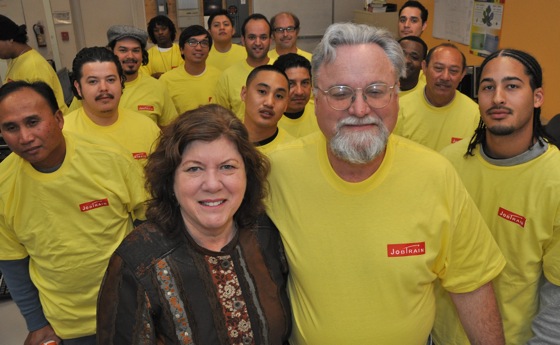 Enter any of the classrooms on the JobTrain (formerly OICW) campus and you instantly feel the energy. The students attending the seven daytime vocational training programs are there not only to learn a marketable skill but to change their lives.

“We help those most in need to succeed,” says Executive Director Sharon Williams (pictured with teacher Tom Huggett and students in the solar training program). “Most of our clients are moving from a culture of poverty to a culture of work. That entails more than just job training. It includes learning the rules of middle class society that bring sustainable success to an individual.”

Williams notes that while people often think of JobTrain as a community agency, it’s also an accredited educational institution offering high quality classes. Last year 75% of its graduates were placed in jobs and 99% were still working or had been promoted within six months of graduation. In addition to solar training, vocational programs include computer service/telecommunications technician, culinary arts, medical office assistant, office skills, and professional health care worker. There are also evening classes and programs for youth and children.

The Menlo Park-based organization’s major fundraiser of the year is the annual Breakfast of Champions, scheduled for May 7 at the Hyatt Regency Santa Clara, which will celebrate JobTrain’s 45th anniversary. The always inspirational event honors JobTrain graduates and features sports heroes, media stars, and community/corporate leaders. Said 49ers Head Coach Mike Singletary who spoke last year: “When I think of JobTrain, I think of hope. Providing hope for those who feel that they’re lost and just can’t get back in the race. Hope for those who feel that they’re not good enough. All of those things make you lose hope. But, JobTrain, you, pick them up, dust them off and put them back in the ring and say ‘let’s go.'”