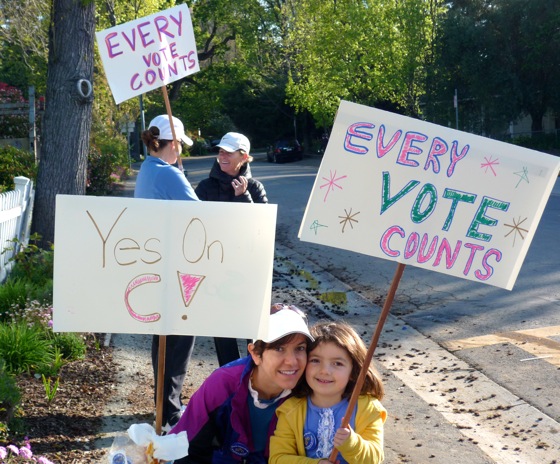 Amidst tooting horns of encouragement, supporters of Measure C, the ballot initiative to provide additional revenues to local schools through a $178 a year parcel tax, were out in force this morning at Hillview, Encinal, Laurel and Oak Knoll (pictured). In addition to waving placards, they were handing out bracelets to the arriving kids, a reminder for parents when they return home from school today.

If passed, Measure C would raise $1.37 million per year during its seven year term. The Vote Yes on Measure C website explains: “Since 2000, enrollment has grown by over 30% – 610 students – and is projected to grow another 300 students during the next seven years. Declining revenue from property taxes, coupled with projected state budget cuts of at least $1.4 million, has resulted in a projected $2 million deficit for the Menlo Park City School District for 2010-2011… Funds generated by Measure C will be used to minimize class size increases and preserve core academic programs.”

Measure C is a mail-in ballot only election; all registered voters should have already received their ballots, which are due by May 4th (postmarks do not count). Many parents dropping off their kids this morning told supporters, “I’ve already voted!”