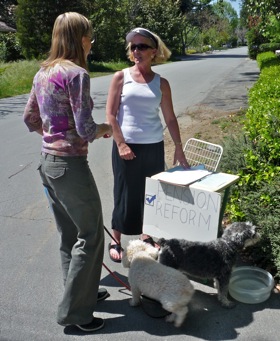 Former City Councilwoman Lee Duboc was stationed outside her West Menlo home this afternoon talking to those passing by about pension reform and gathering signatures to put a measure on the November ballot that promises to reign in what the organization Citizens for Fair and Responsible Pension Reform says are excessive pension benefits received by city of Menlo Park employees. The proposed initiative would apply only to new employees hired after the initiative is approved by voters, excluding sworn safety/police officers. To get on the ballot, the Pension Reform group needs to gather 1,848 valid signatures from registered voters who live in Menlo Park. More information is available on the organization’s website.