What’s the deal with that “couch statue?” 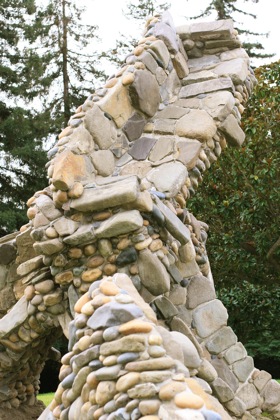 Public art in Menlo Park is often a touchy subject. But love it – or hate it – can you put the right name on it? We’re talking about the rocky sculpture gracing the entrance to Willow Oaks Park. Some residents and Willow Road motorists mistakenly view it as abstract art, while others simply refer to it as the couch statue. And then there are the insiders: They know it’s called Convertibles, though the plaque with this moniker no longer seems to be visible.

Even for many such Willows residents who regularly flock to the park with preschoolers, dogs, and soccer players in tow, it remains something of an enigma. Why sleeper sofas in Menlo Park, they wonder?

Insight can be found at the Website of artist Brian Goggin, who, working with Michael Eckerman, sculpted the piece from 1999 to 2001. Describing Convertibles, Goggin writes, “Remnants of a residential neighborhood grow from the scattered seeds of suburban iconography. Stones conglomerate to form couches, with apparent yearning and consciousness. They wind their way out of the earth, squirming over and lifting up one another as they aspire up beyond the confines of the rubble beneath.”

He goes on to say, “Like the site itself, once blanketed with farmland, later home to working class residents and now an active, professional suburban neighborhood, Convertibles physically and metaphorically embodies the essence of transition.”

So, there you have it. And the next time you drive or cycle by, you might view the piece in a whole new light. As for the kids, they’ll still just want to climb to the top.