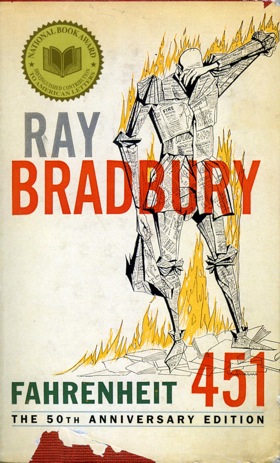 Ray Bradbury wrote his futuristic novel Fahrenheit 451 almost 60 years ago. Just how accurate (or not) was his portrait of things to come? That – and the book itself – will be up for discussion tomorrow (5/16) at Salon Menlo between 12 noon and 4:00 pm  in the Fireside Room of the Menlo Park Recreation Center (700 Alma Street).

“The novel, written in 1953, shows us a world where books and words are banned and firemen are hired to burn books, rather than to save them,” says book group leader Lauren John. “How do folks entertain themselves? Flat panel TVs, of course!”

Excerpts of the 1966 Francois Truffaut film, presented and discussed by Nick Szegda, will also be shown. This is Truffaut’s only film done in English.

Come with your appetite – a free brunch with food from Menlo’s Sunday Farmer’s Market will be provided.