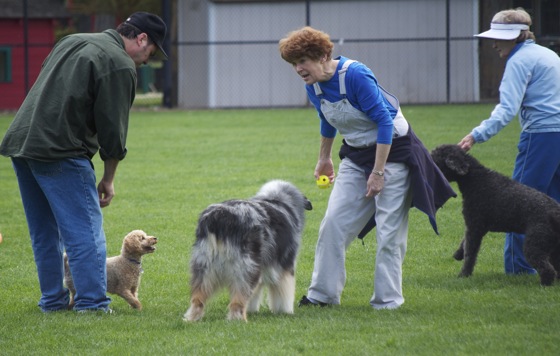 On a recent visit to Nealon Park’s softball field, it was hard to say who was having a better time: the frolicking dogs or their chatting owners. During the weekday morning hours of 8:00 am and 10:00 am, Nealon is a hub of activity and camaraderie, often hosting upwards of 75 dogs (and their humans). The patrons are a welcoming group who value the friendship and conversations as much as the opportunity to exercise their pets.

The combination of expansive, well-maintained fields and a strong sense of community distinguish Nealon among other Peninsula off-leash parks.  As one regular summed it up, “There’s simply no other place like it.”

And the Nealon dog folks appreciate it, taking care to preserve its use. After all, just five years ago there were no off-leash dog areas here. Only after considerable study and civic discussion, did the city establish guidelines for the Nealon site and one at Willow Oaks Park. (The Willow Oaks locale is also a thriving community, especially during the evening hours. But given its eastern location and smaller size, it is more of a neighborhood gathering spot than a city-wide destination.)

The Nealon group really coalesced about three years ago when complaints from ball players surfaced about—you guessed it—dog waste. Concerned the city would revoke off-leash use, the group presented a plan and raised the funds for a dedicated dog entrance and regular clean-up service.

Today, they remain focused on keeping the park flourishing. Every morning at closing time, volunteers scour the field to ensure it is waste-free. And before scheduled softball games at the park, the group pays for professional clean-up by Menlo-based Doggie Waste Away, thanks to donations from some 200 supporters over the years. (To donate or for more information about Nealon’s off-leash activity, contact the group via barbaramillin@yahoo.com.)

Along with Nealon and Willow Oaks, the Menlo dog scene includes the Dog Owner’s Group of Menlo Park, DOGMA, which maintains a Web site and e-mail group for sharing dog-related information and resources.