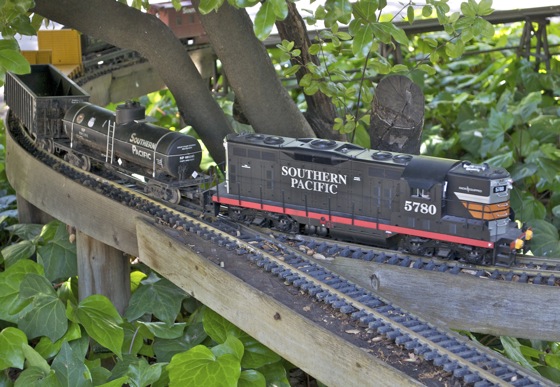 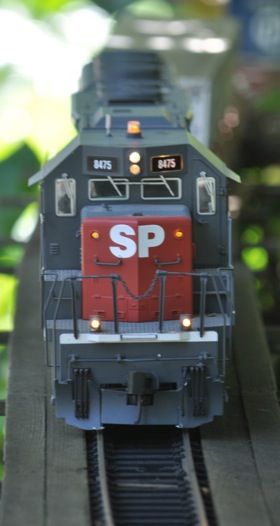 “It’s like a real railroad,” explains owner Colin Camarillo about the model train operation that surrounds all sides of the University Park home where he grew up. “I can run three trains at once, and there’s a train yard where the engines and cars go when not running.”

Now 10 years old, Camarillo Pacific Railroad has grown to be one of the largest in the Bay Area. It’s “100% free lance,” which means that it doesn’t’ represent a specific railway era.

Due to the train’s age, Colin says it’s time to make changes. “The bridges are going to be replaced with raised planting beds and the curves are being widened in spots. Some of my bigger locomotives can barely make it around the existing curves.”

He’s lost count of how many trains he has but is keen on his newest engine (pictured with Colin below, with “top” off), which is battery operated. It’s allowing him to move the operation from from electrified tracks to battery operated locomotives. 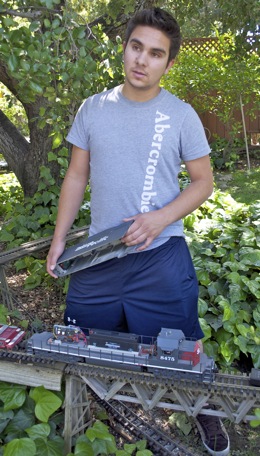 Upon probing, it turns out Colin is a bit of a renaissance man. A graduate of film school, he also plays drums and recently appeared with the group Glass Wave on its latest CD.  He also likes building things with his hands – he constructs all the wood work that’s part of Camarillo Pacific.

Why the passion for trains? “Most kids get trains for Christmas,” Colin says. “I just stuck with it.”