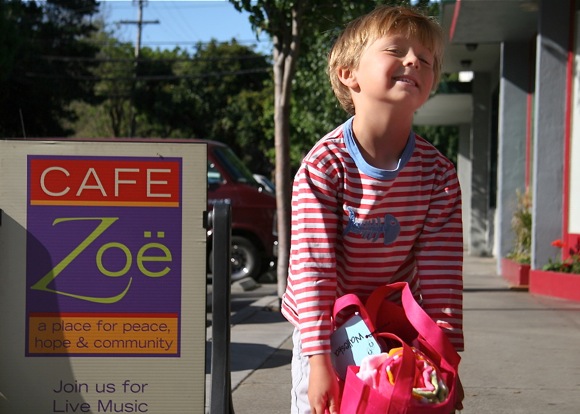 Always a neighborhood gathering spot, this morning Cafe Zoe was even more packed than usual. Willows families who had participated in a summer camp drive for the Clara-Mateo Alliance Shelter were on hand to present the donations to InnVision’s Community Outreach Coordinator, Kristin Chandler (pictured below right with Willows resident Dana Shields and son Charlie).

For many Menlo kids, summer camp in June is de rigueur. And those living at the shelter, located at the VA Hospital on Willow Road, are no exception. On Monday, they begin an eight-week summer adventures program — and thanks to their Willows neighbors they will be fully equipped. 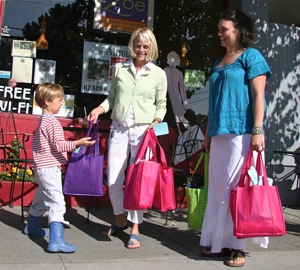 Says Chandler, “It’s incredible. Getting something new is very special, and these kids really deserve it.”

The effort resonated with many parents who were getting their own kids ready for camp. It also struck a chord with the kids, including one five-year-old, who upon learning there were kids who didn’t own swimsuits, drew a poster for the drive that now hangs in the cafe.

A partnership going on five years

The Willows/Clara-Mateo partnership started almost five years ago during the holiday season. When resident Dana Shields heard that the kids at the shelter wouldn’t be expecting any presents, she put out a request through the neighborhood email lists and the response was overwhelming. 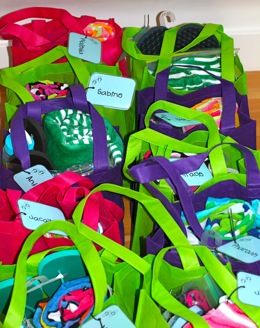 “This neighborhood is an amazing place. These are extraordinary people with giant and generous hearts. I wouldn’t want to live anywhere else around here,” says Shields.

Since then, the Willows community has continued to support Clara-Mateo in a variety of ways, often focused upon the kids at the shelter: holding a Halloween costume drive, cookie-decorating parties, and an Easter basket drive, in addition to donations of household items, monetary donations, and an annual Christmas dinner.

“The unique relationship with the Willows goes back several years. It’s long and loving, and very supportive. And we really appreciate it,” explains InnVision’s Chandler.

When Kathleen Daly took over the café, she quickly became involved in organizing the holiday dinner and expanding the reach of the effort through the café. Her first was on Christmas in 2008 and, as Daly recalls, “I swore at that time that you just don’t serve a dinner at Christmas.”

How you can help

Of course, you needn’t live in the Willows to support the Clara-Mateo Alliance. You can donate to the shelter, as part of the InnVision network, online. Or to more directly do so, this coming Sunday — Father’s Day — Cafe Zoe is providing its next meal for the shelter, a summer barbecue. Monetary and food donations will be accepted up until 3pm on Sunday. More details available at the café, located at 1929 Menalto Avenue.

And after Sunday? Stay tuned for details on the next neighborhood-sponsored drive — gift cards for back-to-school shopping.

Photos by Laura Hamilton, who is a Menlo-Park based photographer who specializes in children and family portraits.