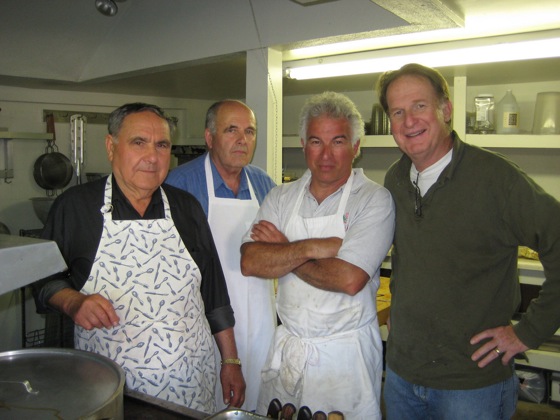 The Italian-American Social Club of Menlo Park continues its rich tradition with a monthly dinner for club members, occasional bocce ball tournaments and quarterly family-dinner nights. Membership in the club is open only to Italian-American men, defined as men with an Italian surname or maternal grandfathers with same.

Having wrangled an invitation to the June dinner, I arrived at the clubhouse about 6:oo pm. The building consists of one large room about 40×40 feet with a speaker’s alcove on one side opposite a large stone fireplace and a second long narrow room across the back. A few members were sitting in the main room that was set up with long folding tables and chairs. Others were gathering in the back room that serves as both a bar, and where later in the evening, the food is served.

Adrian Dioli, the club historian, collected my $12 for the meal and promised me a plate and utensils — not being a regular, I hadn’t realized that to save costs members bring their own.  Adrian told me that typically 60-80 members show up for dinner. On family nights there are often 120, which is about the capacity of the clubhouse.

Catching up with the cooking team

I then wandered out to the kitchen which is in a separate small building in the back. The cooking team for this meal was already at work. Larry Milillo and Richard Durando (pictured in photo, second from right and far right) are experienced cooks. Tony Magagnini and Tony Della Morte (far left and second from left) were helping and learning. Jim Meola, also on this team, was not present.

Three cooking teams rotate for the monthly meals. Ralph Yob, who is in charge of the kitchen operations, came by to chat and offer advice. The kitchen is well equipped. I watched while four large trays of fresh cod fillets — driven down that day from Eureka — were professionally prepared for the oven. Simultaneously two large vats of water were heating up for cooking the pasta. Everyone was having a good time.

Outside, an informal bocce ball game was in progress (there are three courts). By about 6:30 I was back in the bar. A much larger group of members had congregated. Italian aperitifs, American mixed drinks, and beer were popular appetizers to go along with old friends and relatives greeting each other and simply enjoying the evening. I was introduced to some of the younger crowd: Bobby and Mike Budelli, David Dossola, and Brian Ferrari. They all are sons or grandsons of present or former club members.

David then took me into the main room and introduced me to his father, Aldo. Aldo’s father, Joe Dossola, was one of the club founders. Aldo explained that for the first few years after the club was founded in 1930 they met in a building that was in the parking lot that is now between Draeger’s and Peet’s. The present clubhouse on Oak Lane was completed in about 1937. At the time its location seemed rather remote. In earlier days there were many more social events, but today these are somewhat limited by the small size of the clubhouse. Partly in deference to neighbors, the clubhouse is not rented out for social events to others. 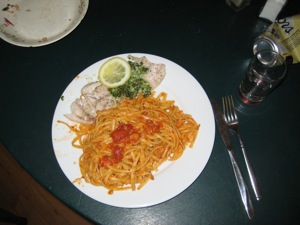 Seven o’clock is dinnertime. I was seated as a guest of honor next to the president, Carl Bianchini, whose father, Charlie, was another founder. Magnums of Italian wine (Gabbiano 2008 Chianti) were already open on each table. First a leaf salad with vinaigrette dressing was brought to each table in large bowls. After the salad, everyone lined up to get their plates loaded in the back room. Each helping of pasta was topped by a simple tomato sauce. Despite the mass cooking procedure, the cod came out perfectly done — moist and tasty. Seconds were available if wanted.

The dinners are pretty much a break even deal for the club. The annual membership fee is $60. A few fundraisers such as raffles provide additional income. The clubhouse is fully paid for (and if ever sold the proceeds would go to charity), so this modest income along with some sweat labor is sufficient for the club’s financial needs. For me it was a fun evening, so much so that I’m thinking about a name change, maybe just dropping the last letter of my family name. How does “Clendeni” sound?