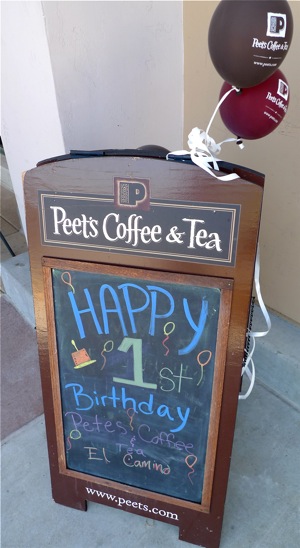 Hard to believe our new Peet’s – the one in the shopping center at Middle and El Camino – has been open for a year, but their signs says it’so, and they should know.

Many of us applauded Peet’s decision to open a new shop at the height of the recession – a practice that is lauded by business schools as being the strategy that allowed Pepsi, during the depression, to catch up to Coke. No word on whether the strategy allowed Peet’s to catch Starbuck’s, the ubiquitous java peddler, with its four Menlo locations, but Peetniks have been thrilled to have another, more spacious outlet for their favorite brew.