Project Read learners give back to community at Connoisseurs’ Marketplace 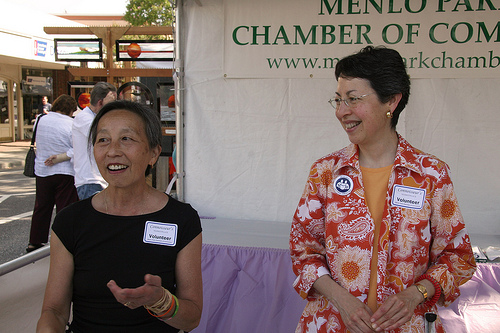 Stop by the Information Booth at the Connoisseurs’ Marketplace, located on Santa Cruz Avenue near Crane Street, and you’ll be greeted by friendly folks who can point the way to the restrooms (the most common question), give you the live band schedule, or tell you the time of the next cooking demonstration. These booth volunteers know their stuff — and they see the community service they are providing as a way of saying thanks for your support. That’s because the booth is staffed entirely by Project Read learners, volunteer tutors, and their friends.

The unique partnership between Project Read and the Chamber of Commerce was the brain child of Project Read volunteer Betty Meissner (pictured on the left with fellow volunteer Maria Lozano), who wanted to find a way to give learners a chance to practice their language skills and get more involved in their communities. The first few years, Project Read learners took over some of the volunteer slots, but now the group organizes and runs the whole operation at the Information Booth. Earlier today, Project Read learners Lucia Soto and Thelma Gonzalez, as well as friend Thomas Crawford, staffed the booth with Meissner and Lozano. 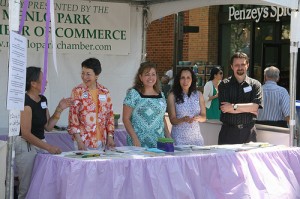 Working at the Connoisseurs’ Marketplace is just one of several Menlo events at which Project Read learners volunteer.  Throughout the year, you will also find them helping other groups and businesses that have lent their support to Project Read, such as at the Friends of the Library book sale, the Fire Department pancake breakfast, and the Kepler’s holiday gift wrap station.

Next up for the group? Project Read’s annual fundraiser, Taste Desserts for Literacy, which will be held on Saturday September 25 at Burgess Recreation Center. Learners and tutors alike are busy planning the event, which will feature desserts from local businesses, a silent auction, and live music.