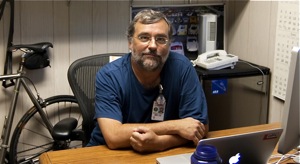 Note: This post was written by Lori White, SLAC National Accelerator Laboratory, who also took the photograph. Both text and photo are used with permission.

With the coming dedication (8/16) of the Linac Coherent Light Source, the word “laser” is generally associated with “X-ray” in the minds of people at SLAC, the Dept. of Energy laboratory that stretches alongside Sand Hill Rd. in Menlo Park.  But there are other lasers at the lab — many other lasers. Lasers for researchers using SLAC resources, lasers for SLAC research, and the injection laser that enables the LCLS to generate its coherent X-ray laser beam. Bill White and his team of self-proclaimed “laser monkeys” in the Laser Science Department try to support all of them.

When White arrived at SLAC five years ago from Lawrence Livermore National Laboratory by way of private industry, the LCLS project was the big draw. “I came here because the LCLS was a very exciting project,” White said. “I knew a lot of the people involved and I wanted to work with them.”

White got more action than he bargained for. “I was hired to build a laser group,” with, as he put it, “enough critical mass to maintain lasers at both ends” of the LCLS. Now there are so many lasers at SLAC that White almost can’t keep count.

Since the LCLS is just ramping up, more lasers are in White’s future. “We are adding lasers at a pretty fast rate,” he said. “I expect to add five systems in the next year, with each system composed of five to 10 lasers.”

White is a gadget lover at heart

Good thing White likes lasers — or rather, White likes gadgets and lasers are great gadgets. Originally from the Dallas-Fort Worth area, he first began tweaking lasers as a graduate student at Texas A&M University. His optics and atomic physics experiments required lasers, and the lasers generally required customization. White became a laser guy, first by necessity, then, as his inner gadget lover took over, by choice. “One thing about laser guys is that they’re never finished with a laser,” White said. “They can tweak it forever. There’s always some way to improve it.” However, LCLS users — not to mention White’s bosses — expect the lasers to be stable for use in doing science.

White’s experience in corporate America, with its similar mindset, came to the rescue. “One thing about building up a laser group is you have to build up the discipline to actually turn on the lasers,” he said wryly. He employs a foolproof method to keep his own laser monkeys in line. “What I do these days instead of tweaking lasers is threaten to tweak them.” That’s usually enough of a threat for White to get results.

White is fond of other gadgets as well, but since LCLS became operational his time is spent on SLAC lasers. His bike has been sitting in his office unused for so long the tires have deflated. There’s little prospect that he will add any new photos to the images of Alaskan wildlife adorning his wall any time soon. Yet along with his love of gadgets, one thing White hasn’t lost in the press of work is his dry sense of humor. A red, white and blue placard hangs on his office door, obviously snitched from the campaign of a certain ex-mayor of Houston now running for Governor: “Bill White for Texas.”

But today it’s “Bill White for SLAC.” Texas can take care of itself, but the research lab has a lot of lasers to tweak.