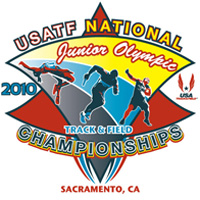 Two local athletes are heading to Sacramento next week to compete in the 44th USATF National Junior Olympic Track & Field Championships. Madeline Price of the Menlo i Greyhounds Track Club of Menlo Park earned the trip by placing third in the Intermediate Girls’ 400 in a time of 58.55 at the Region 16 qualifying meet in Modesto. Jason McGhee, an entering senior at Menlo-Atherton High School, qualified by finishing second in the Young Men’s division 800 in a time of 1:54.19.

Entry for the Junior Olympic Championship is based on athlete performances at preliminary, Association, and Regional levels of the 2010 USATF Junior Olympic Program. Competition takes place in five two-year age divisions, with athletes generally falling between the ages of 8 and 18.