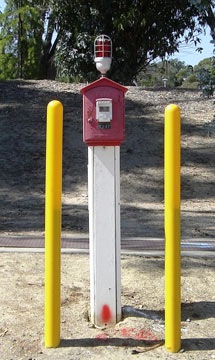 Note: This post is by Ralph Kerwin, the Stanford Linear Accelerator Fire Marshall, writing for SLAC Today; photos are also by Ralph Kerwin. Used with permission.

The iconic red fire alarm boxes that have adorned SLAC since its opening day will soon disappear, victims of technological obsolescence. These Gamewell master boxes are part of a telegraphic fire alarm system that has been reporting SLAC fire alarms to emergency responders since 1968.

The technology is old but reliable. When the alarm box is triggered, a spring-loaded, toothed wheel spins and taps out the coded, four-digit box number. The first such system was installed in Boston in 1845. SLAC’s version of the technology — known as a McCulloh loop — works so well that the underlying arrangement has remained largely unchanged since it was patented in 1882. It was the predominant institutional fire alarm reporting technology nation-wide well into the 1970s. Due to their ruggedness and reliability, Gamewell systems remain in use in several major U.S. cities, including San Francisco.

Despite its age, the SLAC Gamewell system continued to perform effectively until early last year, when a segment of the public phone system transmission lines that connect SLAC to Palo Alto Dispatch were changed entirely from copper to fiber optic. Alas, fiber optic lines are incapable of transmitting telegraph signals. After 40 years of faithful service, the Gamewell System abruptly fell silent. As an interim measure, SLAC Security has been manually notifying Palo Alto Dispatch of SLAC Fire Alarms for the last several months via a dedicated emergency red phone located at the Main Gate. 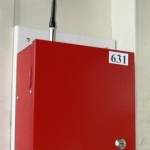 And as for those iconic red master boxes? The ones in good shape actually do have value as collectible fire service memorabilia, going for tens to hundreds of dollars apiece. A very small number of the boxes will be reserved for official commemorative use at SLAC. The rest will be turned over to SLAC Salvage, which will offer them as excess to other government agencies. Afterward, Salvage will offer any remaining units through an online internet auction that is open to the public.