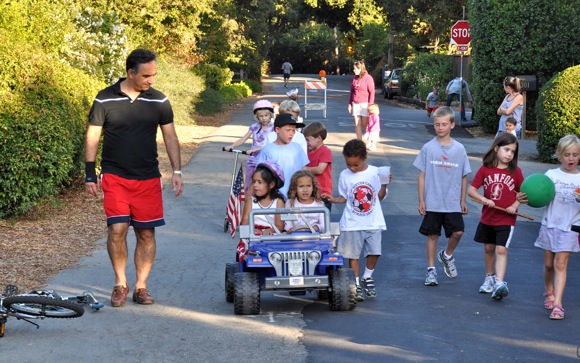 When the University Park neighborhood of [unincorporated] Menlo Park began holding its summer Friday Frolic gatherings about a decade ago, it was an almost weekly event. It was easy to do – the parents and kids would just spill onto the grounds of nearby Oak Knoll School. (Data point for trivia fans; kids in this neighborhood go to schools in the Las Lomitas School District, not Menlo Park City schools, so don’t go to Oak Knoll, which is literally in their backyard.)

When construction began at Oak Knoll a couple of years back, the Friday Frolic went to a reduced schedule, due to needing a street closure permit for Vine St., where it’s currently held.  But while it may only happen two to three times a summer, it’s the same upbeat scene of adults reconnecting, and kids – especially the three to eight set – navigating the street on the wheeled vehicle of their choice, which includes waiting in line for the most popular motorized variety.