Relay for Life of Menlo Park is happening at Burgess Park 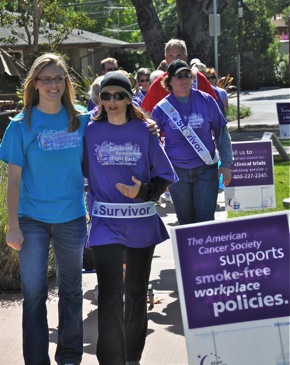 The Relay for Life, a fundraising event for the American Cancer Society, kicked off this morning with a salute to cancer survivors that included a lap around the field. Earlier, Menlo Park Mayor Rich Cline, among others, had spoken poignantly about how cancer had touched their lives.

Relay for Life participants form teams that camp out – at Burgess Park in the case of Menlo – and take turns walking or running around a track or path. The relays are 24 hours and each team has a representative on the track at all times. Vickey’s Valentines is the top fundraising team and Tess Stern that top fundraising individual participating in Menlo’s Relay, which will conclude at 10:00 am Sunday morning. The will be a Luminaria Ceremony at 9:00 pm tonight (8/28) to remember loved ones lost to cancer and honor those who’ve survived.

According to a Relay for Life spokeswoman, the event  began in 1985 when a Washington state doctor, Dr. Gordy Klatt, ran and walked for 24 hours to raise money for the American Cancer Society. Today Relay for Live events are held in over 5,000 communities and 19 countries.

A windy day is likely leading to a chilly night at Burgess, so give Relay participants a shout out if you’re walking, biking or driving by.