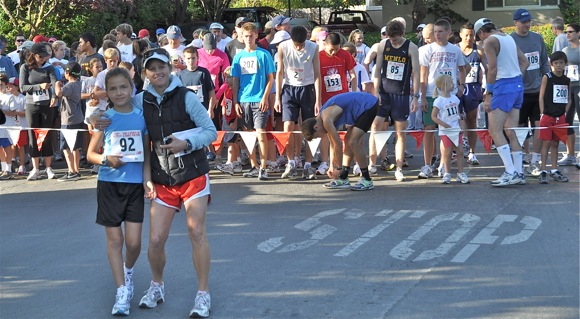 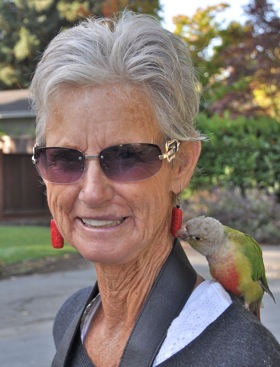 Over a hundred kids and adults took part this morning in the Kids 4 Sports 5K family fun run, the inaugural community wide fundraiser to raise money for after school sports programs for underserved kids in East Menlo Park and East Palo Alto.

Doing the “on your mark, get set, go” honors was Leiney Paul (pictured above with race organizer Katie Ferguson), who donated her birthday money – the tidy sum of $1,000 – to Kids 4 Sports. After a start on White Oak near Oak Knoll School, the race route wound through west Menlo Park streets before circling back to the school for the finish.

On hand for the event was Katie’s mom, Freddie, and Crisco, a Conure parrot, described as the “clowns of the parrot world.” Crisco appeared to be living up to that billing, finding his mistress’s earring irresistible.

Menlo residents Katie Ferguson and Sally Osterberg, who launched the Kids 4 Sports foundation last year, reported that they were very pleased with the first-time turnout.