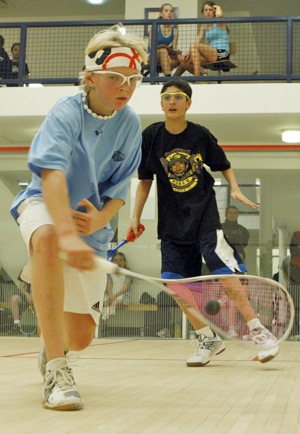 F. Gabriel Morgan, one of the top junior squash players in the country and a member of the U.S. National Junior Team, recently helped Team USA defeat Team Canada at the 2010 Ontario-American Challenge at White Oaks Resort, Ontario, Canada.  The annual three-day competition, held in August, pits Team USA ’s top ranked junior boys and girls in the U13, U15 and U17 age divisions against Canada’s top junior squash players.

Gabriel, currently the U.S. No. 1-ranked junior player in the boys U13 division, was undefeated throughout the weekend and won each match 3-0 in best of five games. In the Sunday finale, he trounced his opponent, Canada ’s No. 1-ranked U13 junior boy, to help lead Team USA to a resounding 19-5 victory in team match play and bring back home the “Battle of the Border” trophy after a two-year absence.

A resident of Menlo Park , Gabriel, 12, has competed many times before against foreign players, yet this was his first taste of international team experience with “USA ” emblazoned across his back.  The American and Canadian teams trained with each other for three days prior to the final championship round. There were several fun off-court activities with their Canadian neighbors, including an excursion one evening to nearby Niagara Falls .

“It was an awesome experience, and I had a lot of fun playing for my country,” said Gabriel, a 7th grade student at  St. Raymond School. “It was one of my goals last season to make the U.S. Team so I was pretty exited to be chosen. It was very cool and I can’t wait to do it again.”

Gabriel’s U.S. Junior National Team experience capped off a sensational 2009-2010 squash season in which he won almost every junior tournament he played in. Playing on the elite Junior Championship Tour (JCT), he was crowned boys U13 champion at JCT tournaments at Harvard University and Princeton University as well as the West Coast JCT event at Seattle. His only defeat came in the finals of the 2010 U.S. Nationals at Yale University .

On the West Coast, squash is witnessing explosive growth especially among junior players. On the East Coast, squash has a very long history and is deeply rooted at athletic clubs, prep schools, colleges, and universities. With the 2010-2011 squash season already underway, Gabriel will soon face a heavy travel schedule and, undoubtedly, endure more than a few Thursday night red-eyes to various Eastern cities to play in weekend tournaments.

“I do a lot of homework on the plane and in hotels but that’s okay because I have a ton fun and I love playing squash,” he said. In the Bay Area, Gabriel trains at various facilities and is a member of The Olympic Club, Pacific Athletic Club, and Stanford Squash Club. He’s a sponsored player for both squash and tennis by racquet company Prince.