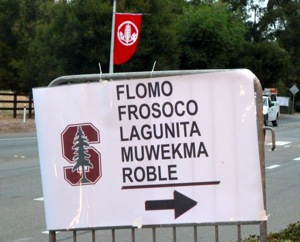 Particularly for those residents of west Menlo Park, the resumption of undergraduate classes at Stanford each fall means more traffic and more people in local establishments. Today begins the move-in process on campus as the class of 2014 gets introduced to campus life. According to the Stanford News Service, the 1,675 freshman come from 49 states and 54 countries, although 38% graduated from California high schools. Wilbur and Stern halls on the east side of campus will house most of the freshman, but more than a  third of them will live close to the Menlo Park border on the west side of campus in Lagunita Court,  Roble Hall, Sterling Quad (where Freshman-Sophomore College is located),  Florence Moore Hall and Muwekma-Tah-Ruk, the Native American Theme House. A sign points to these residences from Campus Drive West.