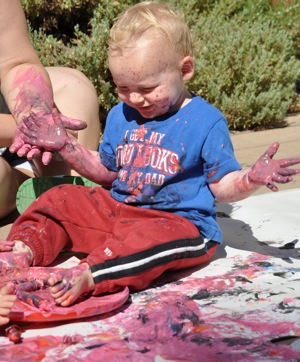 At GeoKids, kids get dirty. And that’s all right, at least with the kids and parents who have carefully chosen this day care/preschool for their children’s early education.

“This is a place where children can be safe and be children, get dirty and enjoy,” says Heather Morado (pictured below), who’s been at the center for 13 years, the last six as Executive Director. “It was only last year that I had a light bulb moment and figured out why we spend so much time counseling parents not to worry about dirt. I think it’s because some parents equate dirt with lack of care.”

Parents Erika Ehmsen and Steve Randle have two children at the center, a 14-month-old son and 4-year-old daughter.  “When I toured GeoKids when I was pregnant with our daughter, I was wide-eyed at the play yards and daydreamed about her getting to romp in this park-like atmosphere, a true outdoor classroom,” recalls Erika. “And I loved the thought of our baby girl being able to explore materials like paint and bubbles and shaving cream and mud, to feel them squish between her tiny fingers and toes, and then experiment with spreading them around.”

Guiding GeoKids is the philosophy of Italian early childhood education expert Reggio Emelia, although Heather is quick to point out that it’s not only his views that guide the center’s approach. “We view children as capable and competent and our parents as partners,” she says. “We’re a community of families, not just a place where you drop off your child. The goal is to create lifelong learners, not just prepare kids for kindergarten.”

It’s really “geo,” with a home at the U.S. Geological Survey

You could have lived in Menlo Park for years and not known that GeoKids existed, tucked as it is on the grounds of the USGS. The center was founded in 1987 by a group of parents who worked at USGS and SRI. Today it serves 80 children (76 families) from age three months through pre-kindergarten. About 40% of the families work for the federal government. There’s a waiting list for enrollment. 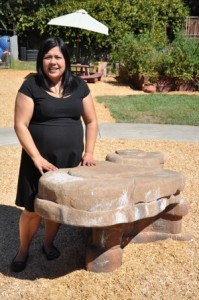 Joann and Radit Tantisira also have two children at the center – and also had positive first impressions. “In one play yard, there was an enormous Styrofoam structure that the children apparently had built themselves, and in another there were children exploring a mud pit,” recalls Radit.  “It was immediately apparent that this was truly a emergent curriculum that really focused on the interests of the children. Our girls have blossomed during their time at GeoKids, and we have all of the teachers and supporting families to thank for contributing significantly to their growth and development.”

While not strictly speaking a co-op, parents are expected to contribute four hours a week at the center. “Today, parents are passionate about their young children,” says Heather. “They worry and have fears. Our job is that help them feel safe about their concerns.”

For Erika Ehmsen, it’s been her “co-op” hours that enriched her and husband Steve’s experience, teaching them how support to their childrens natural desire to explore, play and learn. “We’ve learned about ‘scaffolding’ (letting kids explore a new addition to their environment and build on their new knowledge) and to act as facilitators and observers (allowing kids to problem-solve and to learn by asking for their ideas rather than telling them how and why to do something).” she says.  “Steve and I couldn’t imagine parenting without GeoKids.”