Spotted: SWAT team competition (who would have thought?) 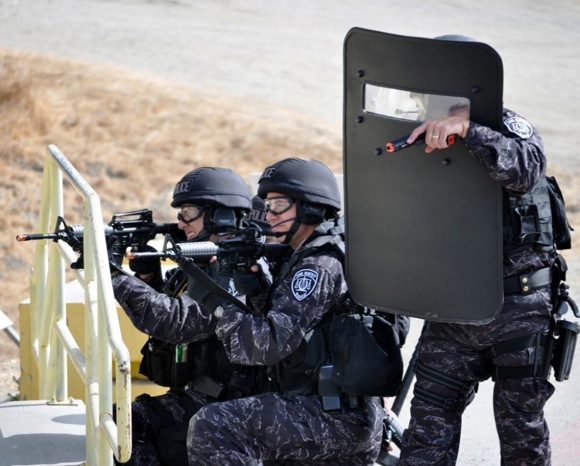 This past weekend, Menlo Park-based SLAC experienced a steady stream of camouflaged police officers through its Alpine Gate. The Lab had an opportunity to play host to more than 30 SWAT teams during the 2010 Urban Shield competition.

This annual competition provides challenging scenarios to dozens of SWAT teams from the Bay Area as well as some international teams including Israel, Jordan and Bahrain. The teams rotated throughout locations around the Bay Area during a marathon 48-hour period. The more than 30 training scenarios included terrorist takeover of a ferry on San Francisco Bay, attacks at the Transamerica Pyramid, and at SLAC, a metals theft gone awry resulting in a hostage standoff.

SLAC Security and Emergency Management staff worked with the San Mateo County Sheriff’s Department – whose SWAT team is pictured – to provide a challenging location for the teams to run their exercise. In this scenario, perpetrators broke into the PEP tunnel near the Alpine Gate to steal metals and when a security officer confronted them, they took her hostage. The SWAT teams engaged their first culprit at the getaway vehicle, then entered the tunnel where they confronted a second criminal, and several hundred feet later faced the hostage-taker to free the hostage.

This post originally appeared in SLAC Today. Used with permission