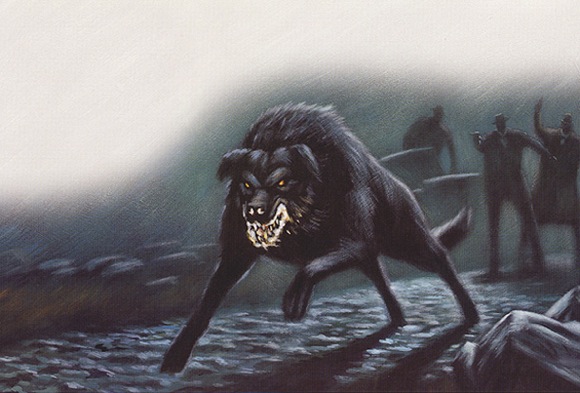 Read your way to Halloween! These book selections were chosen for their fright factor. Some were frightening when first written, but are now so “over the top” that some may find them comical. Others, like the true crime story In Cold Blood, and for me, The Hound of the Baskervilles, (pictured above) are still really, really scary.

There are film versions of all of these, too, so check Netflix, fire up the Kindle (or head to Kepler’s or the Menlo Park Library), lock your doors, turn on all the lights in the house except in the viewing area, and settle in for a chilling literary or fictional adventure.

In Cold Blood by Truman Capote (1965)
On November 15, 1959, in the small town of Holcomb, Kansas, four members of the Clutter family were savagely murdered by blasts from a shotgun held a few inches from their faces. There was no apparent motive for the crime, and there were almost no clues. Five years later, on April 14, 1965, Richard Eugene Hickock, 33, and Perry Edward Smith, 36, were hanged for the crime on a gallows in a warehouse in the Kansas State Penitentiary. Truman Capote read an account of the murder in the New York Times and headed out with buddy Harper Lee (yes, the To Kill A Mockingbird Harper Lee) to investigate. Do not read this true crime story at home alone at night!

Short story by Edgar Alan Poe
I recommend The Fall of The House of Usher (1839) with its English crumbling castle and thunderstorms or The Cask of Amontillado (1846) with its haunted Italian palazzo and catacombs.

The Hound of the Baskervilles by Arthur Conan Doyle (1902)
This story features Sherlock Holmes and Dr. Watson investigating the legend of a supernatural hound that may be stalking and murdering people on the fog shrouded moors of the English countryside. If you want a more contemporary tale about a demonic dog – this one has rabies and, in the 1983 film, it terrorizes the Sonoma town of Glen Ellen – try Cujo written by Stephen King in 1981.

Twilight by Stephanie Myer (2008)
Is there any young woman between the ages of 12 and 16 who hasn’t read it? Here’s the description from Amazon: “Bella Swan’s move to Forks, a small, perpetually rainy town in Washington, could have been the most boring move she ever made. But once she meets the mysterious and alluring Edward Cullen, Bella’s life takes a thrilling and terrifying turn. Up until now, Edward has managed to keep his vampire identity a secret in the small community he lives in, but now nobody is safe, especially Bella, the person Edward holds most dear.

Frankenstein by Mary Shelley (1818)
This is a tough read because of the archaic language, but those who stick with it will be rewarded with some great passages like: “I am interrupted. What do these sounds portend? It is midnight; the breeze blows fairly, and the watch on deck scarcely stir. Again; there is a sounds as of a human voice, but hoarser; it comes from the cabin where the remains of Frankenstein still lie. I must arise and examine. Good night, my sister.”

If I didn’t pick your favorite, use the comments to suggest it!

Lauren John is a librarian and book group leader and co-founder of Salon Menlo.