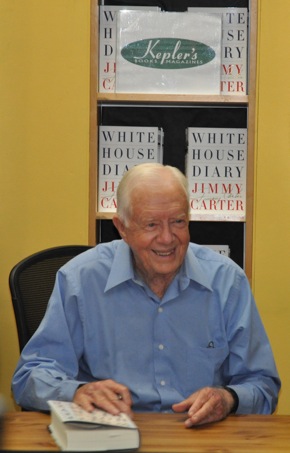 We couldn’t help but think about how many towns of just 30,000 souls (more or less) get visited by a former President of the United States, who also happens to be a Nobel Peace Prize recipient (2002). Former President Jimmy Carter was in Menlo Park this evening (10/26), signing copies of his book, White House Diary, at Keplers Books. At 86, Carter looks well and fit, striding into the room with the confidence of, well, a man who’d once been Chief of State. Dressed casually in blue shirt and khakis, he quickly demonstrated his skill at being one of the fastest book signers on the planet, thanks to a well-oiled machine of handlers and a cadre of Secret Service officers. What was most apparent to the 1,000 or so admirers in attendance – Carter’s winning smile and man-of-the-people manner remains much in tack.