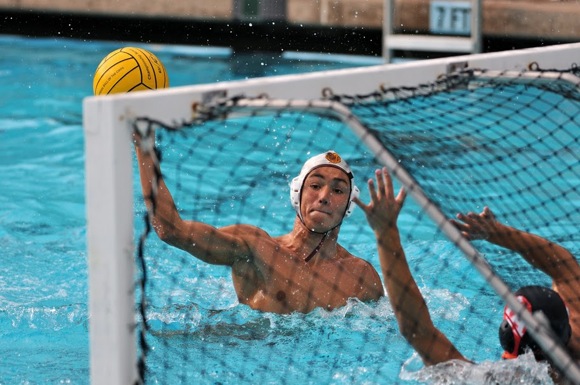 The Menlo-Atherton boys’ water polo team wrapped up 2010 PAL play with a 23-8 shellacking of Woodside on Thursday afternoon.  Ten of coach Marco Palazzo’s players found the back of the net led by Max Wilder and Zach Deal (pictured) who had 5 goals apiece. Woodside’s Brian Bligh led all scorers with 6, but 4 of those came in the fourth period when Palazzo replaced star goalie Alex Gow with senior utility Hunter Carmichael who had not played in the cage before. M-A sophomore Harrison Holland-McCowan had a balanced outing with 2 goals on 2 attempts to go with 2 assists and 2 steals.

The Bears play 3 games over the next 2 days starting with Tokay of Lodi Friday night at 7:45 at Gunn High School. They play St. Ignatius at 10:20 Saturday morning and Monte Vista of Danville at 1:50 PM, also at Gunn.