There’s pie – and then there’s pi 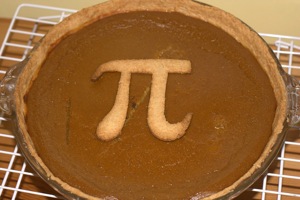 The value of pi is often approximated as 3.14159265, although some have calculated as many as five trillion digits after the decimal point—a series that neither ends nor repeats itself.

Pi has also found a place in pop culture. Many celebrate “Pi Day” on March 14 (twice, at 1:59 a.m. and p.m., if you want to get specific). The day often includes making or eating pie. Fittingly, pies are round and have the necessary parameters to calculate pi.