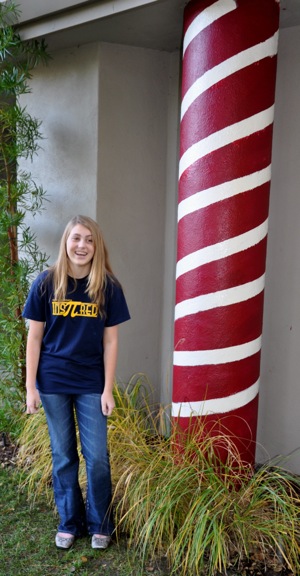 Be gone orange and black! The Hobart St. chameleon pole in west Menlo Park has once again transformed itself. Candy cane stripes now reign supreme – but who knows what the spring will bring?

The Mohr/Wijmans family moved into the house with a pole five years ago. Initially they wrapped Christmas lights around it. The paint-the-pole-to-fit-the-season tradition began when they gave the whole house a new coat of paint. At the time the pole was the same color as the house, but they’d been told it had once been a contrasting purple. “I just knew I wanted to leave the pole for us to do something with,” says Judy Mohr.

For its debut, the pole was painted orange with black cats. More creative efforts were on the horizon, thanks to the enthusiasm of daughter Nora Wijmans (pictured left, and below right with a friend), who is the main brain trust behind the pole’s ever changing persona. 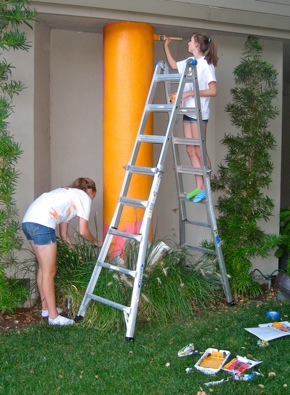 And for months after, I smile when I pull into the driveway.”

The “usually easy” means just that. Some years when it’s very cold, the stencils used to create shapes won’t stick to the pole. The solution: Bring out a few hair dryers to heat things up. And this year, it took more than the usual amount of paint, thanks to the abundance of black on the recent Halloween/Giants World Series victory tribute.

The current candy cane pole will stay until sometime in February. “The Christmas colors get old,” says Judy. “Last year we did a great salmon color for the spring. Next year, who knows. Maybe pink with polka dots?”

Nora and friend painting the Halloween pole courtesy of the family.