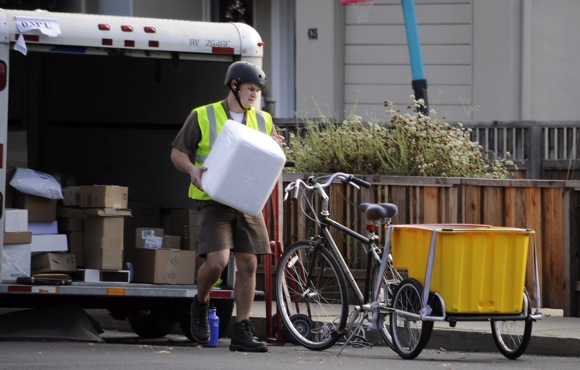 As first spotted last year, UPS is again deploying a fleet of bicycles with trailers to make package deliveries in Menlo Park. Throughout the day, the pedal power delivery men can be spotted on University near Middle – where UPS parks a U-haul filled with the day’s deliveries – picking up packages for their designated route.

“This year we have about a dozen bicycles being utilized in the Menlo Park-Palo Alto areas,” emailed Rhoda Daclison-Dickey.  “The bicycles are definitely a greener solution since it saves us from having to put additional package cars on the street. It also helps us to cover more dense areas, such as residences and apartment buildings so that we make our service commitments to our customers.”

For trivia fans, UPS will deliver 278 packages every second during what it calls “peak weak,” Dec. 20-24. The company estimates that Wednesday, Dec. 22, will be the busiest day with 24 million packages delivered worldwide.