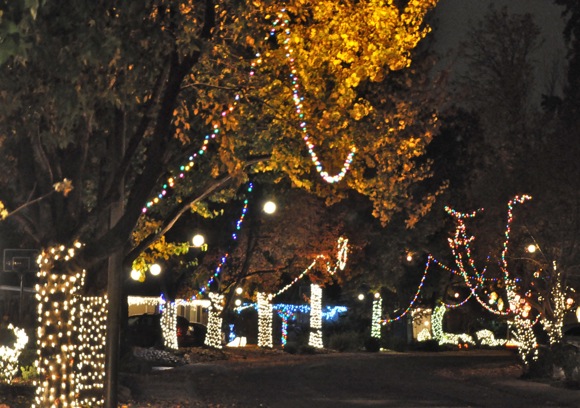 When your neighbors – those folks over on Sherwood Drive (pictured below) have been doing it big for years – as far as holiday lights are concerned – the gauntlet is drawn. When you’re just a block away, you just need to do it bigger. So until someone alerts us otherwise, Linfield Drive between Laurel and Sherwood is currently Menlo Park’s most lit holiday street. 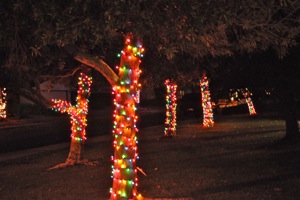 “This is our third year going all out,” says Linfield Drive homeowner Cary Frame. “It was easier than we thought to get everyone involved. [The “we” being  Cary’s wife, Annette Smith.] We simply sent out a flyer, which spelled out our vision and what our neighbors needed to provide for lights. We were thrilled that everyone welcomed participating. As part of the decorating day, we also held a potluck in our garage at sunset. We got the idea from what the homeowners on Sherwood were doing and wanted to upstage them.”

The result: people are walking and driving down Linfield Drive to enjoy the decorations. 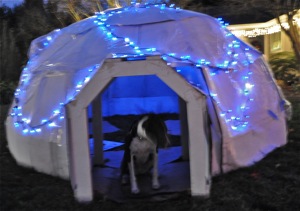 Last year Cary introduced an added attraction, an igloo that kids could play in. Due to the heavy rain this year, the igloo (with dog Max posing) was later in coming and has already endured a number of repairs.

“The igloo idea stemmed from a pile of white cardboard boxes that I stumbled upon last year,” says Cary.  “I took the boxes and built the first igloo with them. But, it partially collapsed after the first rain last year. This year, I had some left over 2×4 boards and decided to use those for the frame to make a more stable igloo. I  prepared the ‘snow blocks’ from cardboard again. I added blue lights inside and out to give it a frosty appearance.”

So, even if your kids haven’t visited Santa this year or gone nose to nose with Rudolph, you can promise them a romp in an igloo this Christmas Eve!