Creativity unleashed at Oak Knoll School, thanks to Imagination Playground 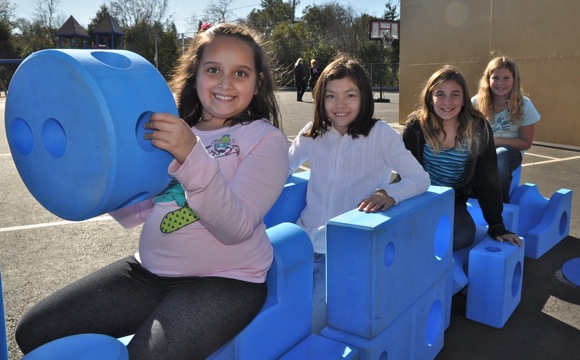 The third/fourth/fifth graders were at noon recess at Oak Knoll School, and a subset of the kids on the playground were busy building and creating, thanks to a bunch of giant foam blocks and tubes, mats and fabric. The outcomes were as varied as the kids themselves – from making their own teeter tot and pretend multi-passenger vehicle to constructing a mini stage to sing from. 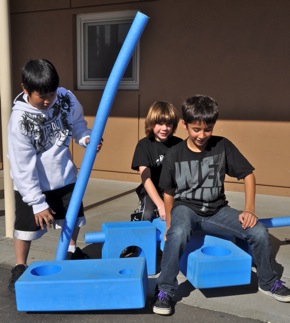 The loose parts that were keeping the kids so engaged are part of the Imagination Playground that arrived at Oak Knoll earlier this week, funded by the Menlo Park-Atherton Education Foundation Jeannie Ritchie grant and the school’s PTO.

“[Principal] David Ackerman and I first read about the Imagination Playground in Time magazine last August,” said assistant principal Kristen Gracia, who’s in her first year at Oak Knoll. “We’re always looking for ways to offer unstructured play and immediately got to work on a grant proposal.” 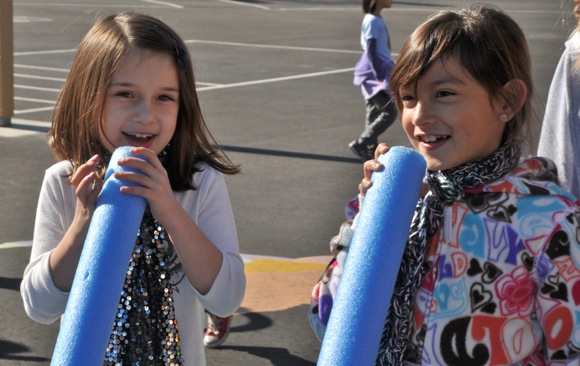 The out-of-a-box (literally!) play space concept was conceived and designed by architect David Rockwell “to encourage child-directed, unstructured free play, the kind of play that experts says is critical to a child’s intellectual, social, physical and emotional development.” With its focus on loose parts, Imagination Playground offers a changing array of elements that allows kids to reconfigure their environment and play the way they want to at any given moment. 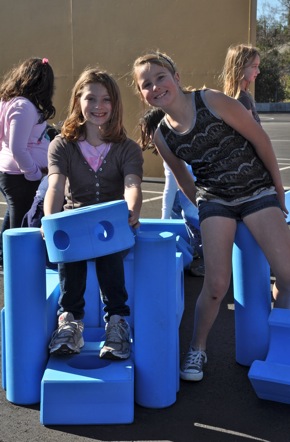 The first Imagination Playground Park opened to the public in July 2010 at Burling Slip in the South Street Seaport area of New York City, a collaboration between Rockwell Group and the New York City Department of Parks and Recreation. Rockwell Group, is now partnering with KaBOOM!, a non-profit dedicated to saving play for America’s children, to bring Imagination Playgrounds to communities across the country.

There was much fantasy play going on in the Oak Knoll school yard when we visited. There was also a good degree of cooperation. The tubes were being used for building not bopping, the blocks for building not tossing, and the kids seemed to be enjoying not only the constructing part of the activity but interacting with what they’d built. In sum, they seemed intrigued and delighted.

“It’s been fun to watch,” said Kristen. “Kids are so programmed today that the first thing they wanted to know is ‘what are the rules?’ We told them, ‘There are no rules,’ other than safety, of course. It took them back at first, but then they jumped right in!” 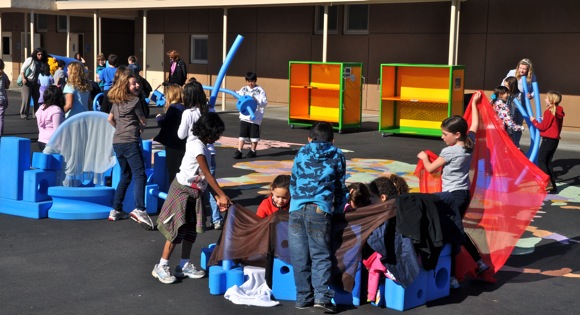