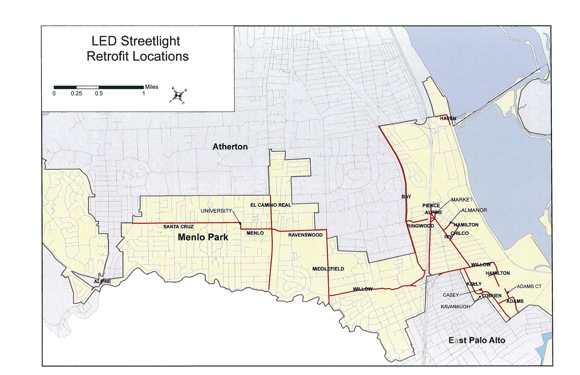 Approximately 445 of the city of Menlo Park’s 2,300 streetlights are being retrofitted with light-emitting diode (LED) technology, according to a press release issued by the city. Energy savings will result in approximately 235,000 kilowatt-hours per year in electricity, a CO2 reduction of 123,000 pounds per year, and a $29,000 savings per year. The city can also claim PG&E rebates.

The new LED street light fixtures will have a similar appearance to the existing cobra head style lights and will be mounted on existing streetlight poles/arms. LED lighting provides a whiter, brighter light which improves night visibility while lowering energy consumption and maintenance costs. These lights contain no mercury.

Funding of the lights was provided by an Energy Efficiency & Conservation Block Grant of $163,154 from the California Energy Commission and $160,000 from the Community Development Non-Housing Fund.

The city selected locations – shown on map above – based this criteria: