Can the dino-bird be brought back to life? 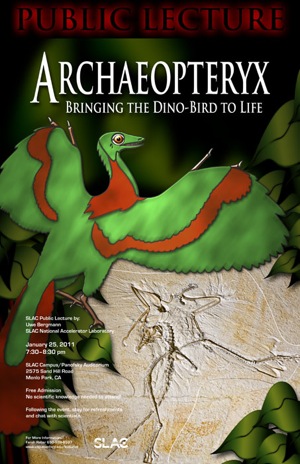 Two of the Archaeopteryx (dino-bird) fossils first discovered in 1861 in Bavaria, Germany are currently in residence at SLAC in Menlo Park where, using the intense X-ray beam, researchers are searching for the chemical remains of the original living creatures. The public is invited to learn more at a lecture given by Uwe Bergmann on Tuesday, January 25 at 7:30 pm in Panofsky Auditorium.

Dino birds, which had bird-like feathers and dinosaur-like anatomical features, lived some 150 million years ago. When first discovered in the mid-19th century, Darwin had just published On the Origin of Species and scientists wondered if this strange creature could be the missing link that Darwin’s supporters hoped to find.

The upcoming lecture, which will explain how the studies attempt to bring the original dino-bird back to life, is free and no RSVP is needed. Attendees are required to bring a photo ID to enter the SLAC campus, which is located at 2575 Sand Hill Road in Menlo Park.