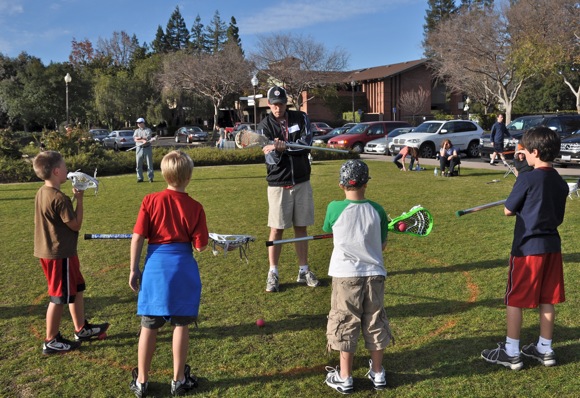 Until recently, local kids who wanted to play lacrosse had to join a team in Redwood City or Palo Alto. But with the growth of the sport, local parents petitioned the league to start a new club. The result: Menlo Park and Atherton now have their own lacrosse program, the Grizzlies. 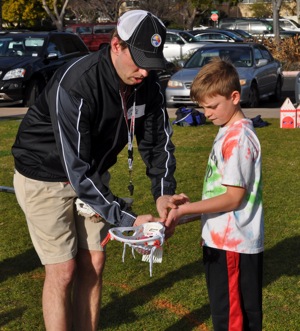 “We’re focusing on the younger kids, knowing that the older kids will probably want to stay with the club they’re already playing for,” said Jeff Kangas, (pictured at a recent lacrosse clinic) president of the club that MJ Davey worked to get off the ground. “We’re fielding boy and girls under 9 and an under 11 boys team. There’s also a special program for five- and six-year-olds called GrizKids. We’re hoping these young kids will be the foundation for the program in the future.”

Jeff grew up on the East Coast and played both youth and college lacrosse. “I always felt that lacrosse was good for me,” he says. “I wanted my kids to have that experience as well.”

Like baseball, lacrosse is a spring sport, running February to May. “As a second sport, we need to be careful not to conflict with Little League,” says Jeff. “In particular, the younger kids should be able to participate in both.”

To spur interest in the sport, the Grizzlies held a lacrosse clinic last Saturday (1/22). “Kids like getting that stick in their hand and can develop a lot of dexterity,” says Jeff. “Once they develop confidence, they really get going. It’s a incredibly fast sport.”

Those interested in having their kids play lacrosse, should email MenloAthertonLacrosse@gmail.com.