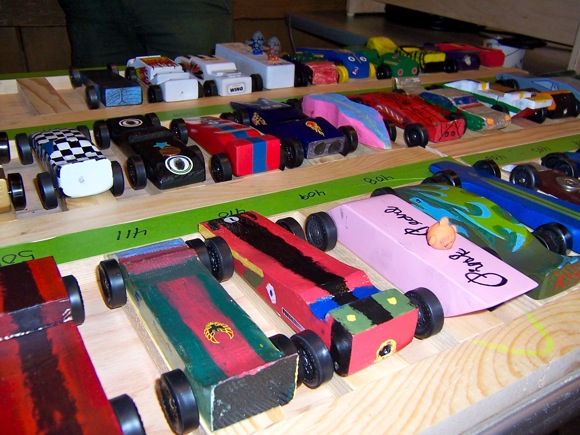 The tigers, wolves and cubs gathered wide-eyed around the room. A palpable buzz of excitement filled the air and the track loomed large. Some wolves feverishly looked for their number, while some tigers scampered about trying to eye the clock. The scene, while fraught with tension and excitement, wasn’t a trip to the zoo. It was the Cub Scout annual Pinewood Derby contest.

For more than 50 years, boys across America have participated in this creative and competitive tradition. What started as a Cub Scout response to the Boy Scout’s Soap Box Derby races of yore, has grown into a full-fledged miniature car race that has Cub Scout boys everywhere very excited this time of year. And it was no different here in Menlo Park Sunday (1/23) when the four Dens of Pack 565 gathered to hold their annual race.

“It’s a really exciting event. The boys get to build their own cars and have a great time,” said Chris De Cardy, lead organizer of this year’s race.

The boys received their “kits” a few months ago along with detailed instructions and regulations for creating their cars. Several Build Days were held at volunteer houses where the scouts and their parents came together to design and construct their car. The kits contained a block of pine wood, a set of plastic wheels, and four axels. Cars were not to exceed a weight of more than 5 ounces. The dads and boys spent weeks cutting, shaping, sanding, and painting their cars to perfection for the big race.

Soren Peterson, a Bear and a third grader at Encinal School said, “It was the best Pinewood Derby we’ve had since I started Cub Scouts and I came in second place in every race my car competed in!”

The day before the race, scouts had to turn in their cars for inspection, to ensure that no rules were broken. Assuming the car passed inspection, the car was then “impounded” and stayed at the race location (Laurel School) overnight. That way, once the car was inspected, it was no longer able to be played with or changed.

Of course, winning isn’t the only goal. The idea behind Pinewood Derby is to give the boys a fun project to do with their dads or parents, to learn how to use tools safely and effectively, and to enjoy the spirit of competition and the satisfaction of completing a project.

As one dad told his son, “It’s all about the journey.”

After 55 heats, a lot of loud cheering and oohs and ahhs over the many creative car designs, the color guard took the flags away and the race was over for another year. As the MC put it, “To win is to finish and to finish is to win.”

The scouts will have to wait for their next pack meeting to find out who had the fastest car.

I have fond memories and a scar from my older brother’s derby days. I wanted to carve and shape a car of my own and reshaped my thumb instead. I hid it from my parents and kept working on my chunk of pine. I never realized “my dream” of a finished car to race, but I enjoyed my brother’s race for glory. I’m pleased to see it’s still around.