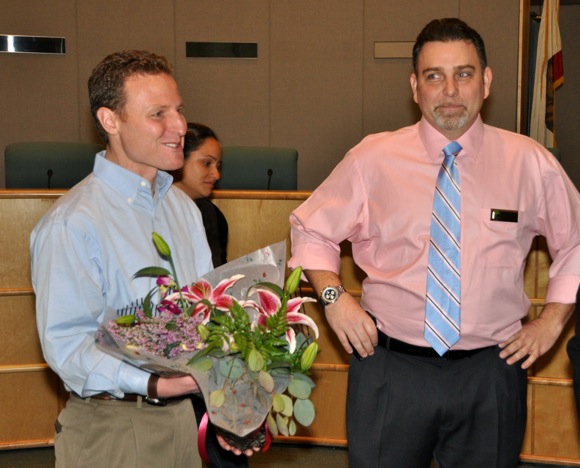 In what Mayor Rich Cline (pictured above right) characterized as “the single biggest event in our town’s history,” Facebook today formally announced it is moving to the former Sun Microsystem campus in Menlo Park. “Facebook brings a global, dynamic brand to our town,” Cline said. “It’s a once in a lifetime opportunity for our community.” 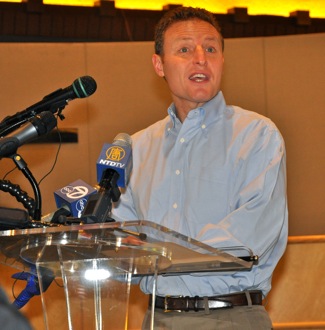 The announcement was made by Facebook CFO David Ebersman (above left and right) at a press conference held in the Menlo Park City Council chambers. The Sun campus was “far and away our first choice,” he said citing “central accessibility” and “local amenities.”

“The move to Menlo Park comes with responsibilities,” Ebersman said, acknowledging that there is work to be done around issues like traffic and environmental efficiency.

In his remarks, Cline said that debate is to be expected in the coming months, but promised transparency and opportunity for input from local residents. He said he was hopeful that Facebook’s presence would bring more services and retail stores to the surrounding Belle Haven neighborhood of Menlo.  “We want to be make sure we’re getting enough from Facebook for what we’re giving.”

“It’s best if we can turn it upside down and make it a wide open process, involving the entire community,” he said. “That’s my big dream – to make it a community-led outcome that results in more housing, retail, feet on the street, vibrancy for the neighborhood.” 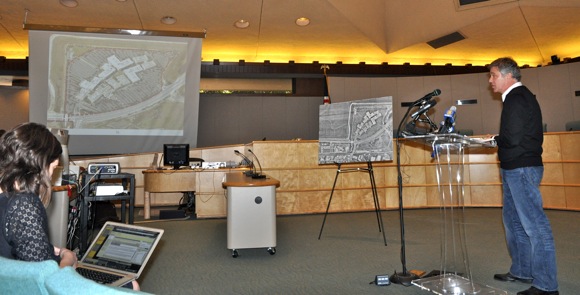 John Tenanes (above right), Director of Global Real Estate for Facebook, outlined more details of the move, explaining that it’s a sale leaseback arrangement, a 15-year lease with option to buy at five years. The former Sun Microsystem campus, now occupied by Oracle, covers 57 acres and contains 9 buildings totaling about 1 million square feet. Facebook also purchased an adjacent 22-acre tract at 312 and 314 Constitutions Drive, formerly owned by General Motors. The two properties are connected to each other by a tunnel underneath the Bayfront Expressway.

Facebook employees will begin to move in June or July, with the goal of completing the transition to the new campus by the end of the year. Facebook’s current location in Palo Alto will be retained, at least until the lease expires. 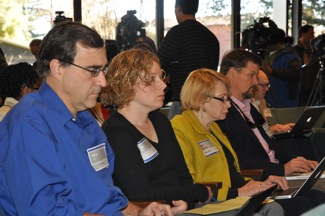 In addition to press from all over the world, the City Council chamber was also filled with members of the community, many of whom were from Belle Haven, the neighborhood that’s most likely to benefit from the Facebook move. Tenanes said that he was working with HR to set up a dedicated Menlo Park job site just for residents.  But, in answer to a question from the audience about opportunities for small local businesses to work on the renovations currently underway, he replied that there was no process in place to hire local craftspeople at this time.

One local business owner, Katherine Guisto of A Bed of Flowers seized the moment, presenting Ebersman with a bouquet of flowers. “Facebook is moving across the street from us, ” she told InMenlo. “It’s been tough on business as the number of Sun [now Oracle] employees diminished. Now I’m so happy – I just wanted to say welcome to the neighborhood!”

Building renovations will take place to “create a more open work environment that maximizes informal conversations and the free flow of ideas and energy.” That work will coincide with a cooperative effort between Facebook, the City of Menlo Park, and the American Institute of Architects of San Mateo on a design charrette, focused on the Belle Haven/Willow business area. Residents are invited to take part in the first open forum on Saturday, March 5 from 8:30 am to 8:00 pm at 10 Network Drive in Menlo Park.