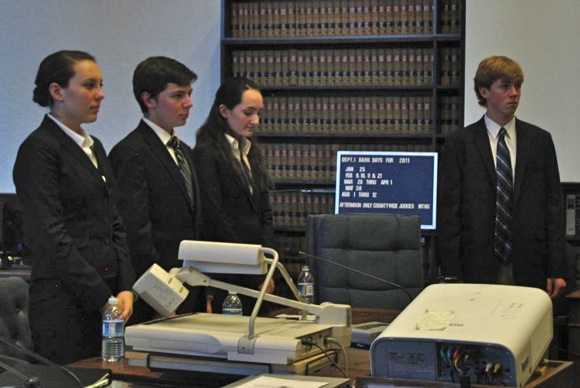 Menlo School won the final round of the San Mateo County Mock Trial Championship against state champion Hillsdale High School.  For the first time ever, Menlo’s Mock Trial swept all eight juror score cards at the San Mateo County finals, a clear win over Hillsdale and their third win in the past four years. The Menlo team, made up of 25 students, now heads to the State Championship in Irvine, CA in late March.

Menlo was undefeated in the first three rounds of competition, advancing to the playoff round where both Prosecution and Defense beat out San Mateo High by wide margins.

The topic of this year’s case is timely: cyber-bullying and the First Amendment. In People v. Woodson, Jesse Woodson is charged with assault with a deadly weapon and with violating a new anti-bullying and cyber-bullying statue. According to the prosecution, Jesse made online threats to Angel, the new kid in town, and then attacked him with a brick. But the defense says Angel is exaggerating. And does the new anti-bullying statute unlawfully prohibit protected speech?

“Winning with a team that only has three seniors has been especially gratifying this season,” said Dan Devitt, Menlo School teacher and mock trial team sponsor.