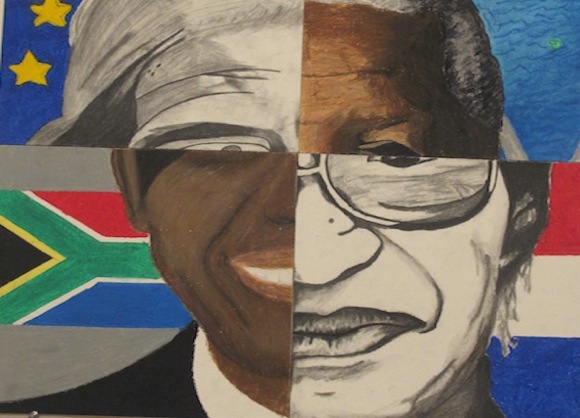 Working for only two and a half weeks, the students pulled together some inspiring pieces. Each artwork comes with a short response, explaining why the artist chose their figure and how they have promoted peace.

The Peacemaker’s Project started with Peter Shaw, a local artist, Trilling, and Darlene Markovich, the Executive Director of the “Missing Peace Project” for the Dalai Lama. Shaw’s new “100 Peacemakers” portrait, with figures that range from Chief Black Elk to Albert Einstein, inspired the project. He began working on this portrait in 2007 and just recently finished in 2011. This led to the collaborative idea of spreading the same kind of peace project to the youth, starting with local high schools.

The Project will use modern technology like Facebook, Twitter, etc., to post the student’s art work.  The Project’s goal online is to get art teachers around the world to participate, like those in Iran and Egypt. The main goal of Project Peace is to connect the world with art and spread peace. Shaw believes that technology is the best way to spread the idea of peace among the youth, as it defines our generation.

“This is the first show of its kind,” said Shaw. “I want to promote the current youth to be peacemakers. My generation has lost its focus of what their parents have fought for,” which shows their main purpose of the project: inspiring the youth by using our main form of connection- social networking. The project has started small but Shaw predicts that it will grow into something universal.