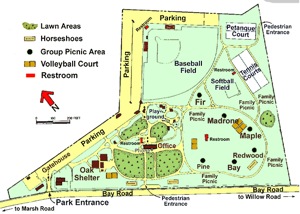 A press release issued by San Mateo County Manager David S. Boesch this afternoon (3/23) confirmed what residents of  the Suburban Park and Lorelei Manor had already heard: Flood Park in Menlo Park is slated to be closed, saving the County $205,000 annually.

The park closure is just a small portion of the potential $50 million in cuts to County programs and services, but one that hits the adjoining neighborhood hard.

“Our neighborhood has been circulating reports that Flood Park is slated to close indefinitely with a final vote by the San Mateo Board of Supervisors to come in May,” Suburban Park resident Jill Olson emailed InMenlo. “Help! We had a Menlo Park Police Officer at a neighborhood watch meeting last night and he stressed the potential for criminal activity in a locked up and vacant park!

“Of course the loss of the park to local families is substantial! The park is full each summer weekend with neighborhood kids, jumpy houses, Mariachi Bands, corporate events and many, many low income families from east Menlo Park enjoying a day in the sun.

“Help us get the word out to locals that their park is closing! All of the neighbors surrounding the park were not notified of the potential closure. Some folks did report getting an email survey from San Mateo County but most of the folks I talked to did not get the email survey. We don’t want to lose this value asset to our neighborhood and a park that many low income folks (with little political clout) use regularly.”

Jill asks that people who don’t want the Park closed email District 4 Board of Supervisor Rose Jacobs Gibson (RoseJB@co.sanmateo.ca.us) and the chair of the County Parks Commission (parkcommission@co.sanmateo.ca.us).

There’s been discussion about the city of Menlo Park taking over Flood Park, reported by Sandy Brundage in the Almanac. Residents can weigh in on the Park’s slated closure in person starting next week.

“The Preliminary Budget Hearings that begin Tuesday will permit the Board and the public to fully weigh the impacts of potential cuts before I prepare and submit a budget for our normal budget hearings in May,” Boesch said. The hearings start at 1:00 pm in the Board Chambers, 400 County Center, Redwood City. Visit the County’s budget page online for a full schedule and to see when discussion about Flood Park will take place.