“World in Solidarity: From Polish Solidarność to the Arab Spring” screens at MAPAC on May 25 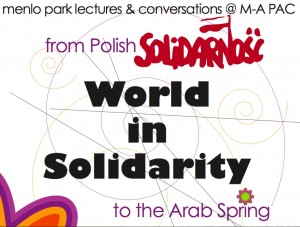 The nonprofit Rebuilding Alliance, an organization involved with village-centered building and peacemaking, is screening the film World in Solidarity: From Polish Solidarność to the Arab Spring on Wednesday, May 25 at 7:00 pm at the Menlo-Atherton Performing Arts Center.

“When the Egyptian people went to the main square in Cairo to stand together to force a change in their government and society, some of us thought, ‘We have seen this before — in Poland in 1980,’” says Donna
Baranski-Walker, executive director of Rebuilding Alliance. “Poland’s outcome was democracy, economic development, and a prominent voice in European affairs — but it would take time. The nonviolent strategies and the persistence of the working men and women of Poland defeated police-state tactics and brought an end to the Cold War division of Europe.”

After the film, Baranski-Walker will engage Polish documentary filmmaker Jolanta Kessler Chojecka in a discussion with San Francisco State University media professor Dr. Dina Ibrahim, a native of Egypt. They will explore current events with footage from the ongoing Egyptian freedom spring.

The film and lecture is open to the public: tickets, available online, are $10 per person, $5 students. The event is sponsored by two Menlo Park businesses, Flegel’s Fine Furniture and Bona Polish Restaurant.