About my style: Mikeala Flink 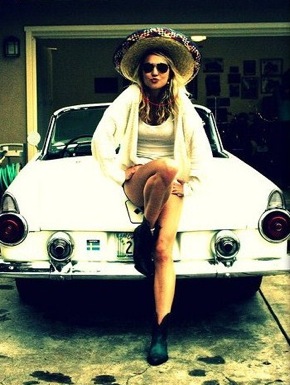 Editor’s note: Do you have a distinct style? Know someone who does? Let us know and you or your friend/colleague/neighbor may be featured on InMenlo – tips@inmenlo.com.

As summer excitement starts to kick in, the traditional short shorts and classic A-line skirts are becoming apparent. Menlo-Atherton High School junior Mikaela Flink is one individual who stands out amidst the crowd. Her unique style is solely based on her own inspirations, creation, and imagination.

She has an aura of your typical Californian who enjoys summer and the beach. For Flink, it is all about being comfy and following the current fad just to seem “on top of it” isn’t a huge priority. “I definitely like the beach and I feel like my style kind of resembles the beach sometimes,” claims Flink.

Throwing on a simple white cotton mid-length dress and a tan vintage hat with a thick dark brown ribbon tied around it declares comfort, but with style. Comfy doesn’t always necessarily mean old sweatpants and a giant hoodie.

“I think everyone could wear whatever they want! It’s just up to them on how comfortable it makes them feel. If whatever you’re wearing makes you feel pretty or good then it shouldn’t matter what other people think,” says Flink.

Being outside of the box when it comes to fashion isn’t that difficult for Flink. One day she would be wearing in a long, loose top paired with ripped shorts and sandals. Or the next day she would be dressed in a white tank top hidden beneath a thick white cardigan, short dark tights, and ankle-length boots. To top it off, she would be wearing a huge sombrero and dark shades. Mixing and spicing things up a bit isn’t always that bad.

Flink thinks that shopping at the boutique stores such as the ones in the Haight-Ashbury district in San Francisco is the right way to go. “I always find the coolest clothes and other stuff there,” she says.

Aside from her style illustrated through her clothes, Flink’s fingers seem to always hold authentic and unique rings. Her wrists sport with bracelets of all colors and designs.

So whether it’s dressing in ripped jeans or a stripped mini dress, Mikaela Flink finds her own inspirations within her surroundings and doesn’t mind going all out once in a while.