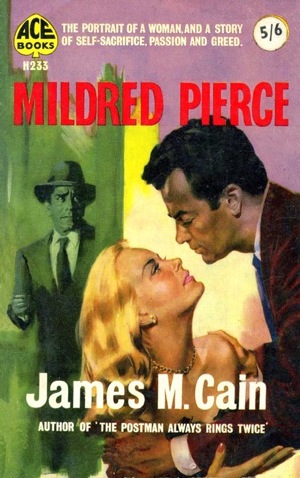 Editor’s note: Salon Menlo, led by book group leader Lauren John and Menlo Park librarian Nick Szedga, returns to Menlo Park on Sunday, June 5. The topic is Mildred Pierce: The Book, The Movie, The Pies! focusing on the James Cain novel and the recent HBO miniseries. The free event begins at 1:00 pm in the Elm Room at the Menlo Park Arillaga Recreation Center, 701 Laurel St. With the famous female fictional character in mind, we asked Lauren to suggest some additional summer reading for women. We’ll turn to some suggestions for men in advance of Father’s Day.

Mildred Pierce by James M Cain (1941), 304 pages. (Check Kepler’s availability – or Kindle edition).
A recent five-part HBO miniseries starring Kate Winslet as Mildred has renewed interest in this hard boiled novel about a single mother from Glendale, California who builds a pie/restaurant business during the Great Depression with great cost to her family and personal life. The 1945 film version, less faithful to the book, won Joan Crawford an Oscar for the title role.

He Said What?: Women Write About Moments When Everything Changed edited by Victoria Zackheim (Check Kepler’s availability – or Kindle edition)
This is a  brand new (2011) collection of essays focused on women’s reactions to the men in our lives — our fathers, our husbands, our boyfriends, our lovers. Many of these women have novels and memoirs to their name, so if you like their style, you can read more of it. Pam Houston, director of creative writing at U.C. Davis, offers a “greatest hits” list of  He Said What moments including #18: “I love you so much it would be okay with me if you never said another word.”

Three Stages of Amazement by Carol Edgarian (2011),  296 pages. (Check Kepler’s availability – or Kindle edition)
Here’s the review from Publishers Weekly, “Edgarian’s accomplished second novel (following Rise the Euphrates) looks at the way the privileged cope — or fail to cope — when the fates turn hard against them. Charlie Pepper gives up his surgical practice and moves his wife, Lena, and family to San Francisco to found Nimbus Surgical Devices, just in time for the 2008 market crash. While he scrambles to replace funding, Lena has her hands full with the household, a premature infant with multiple health issues, a young son, and her own family. They are already teetering on the edge when Charlie is offered funding from the one source Lena will object to: her uncle Cal, the man behind her father’s failed business and, possibly, his death. Edgarian is in fine form, giving readers a well-told story with characters of great depth and complexity, but it is her crystalline writing and the unique narrative tone that elevates this the most.”

A Singular Woman by Janny Scott (2011) 376 pages. (Check Kepler’s availability – or Kindle edition)
An authorized biography, about President Obama’s mother  Stanley Ann Dunham (1943-1995), who was 17 years old when she gave birth to him. Author Scott is a former New York Times reporter.

The Battle Hymn of the Tiger Mother by Amy Chua (2011) 256 pages. (Check Kepler’s availability – or Kindle edition)
This proponent of tough love /old school Asian parenting has set Bay Area PTAs reeling. Chua’s daughters are not allowed to have sleep overs or participate in team sports — academica and music lessons come first — and mediocrity is not accepted. No “good job” comments in this family — unless the job is superior. Chua is a law professor at Yale, and she has received death threats since writing this book.