“Once On This Island” is Hillview School spring musical 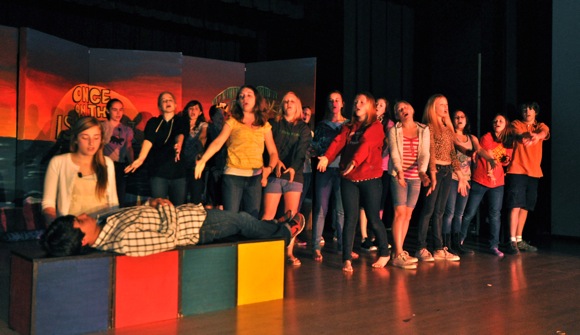 Under the direction of teacher Tyler Hunsacker, Hillview Middle School is presenting the Broadway one-act musical Once On This Island in the school Multi on Friday, June 3 at 7:30 pm, and at 2:00 pm and 7:30 pm on Saturday, June 4.  Tickets will be available as the door – $5 for adults and $2 for students.

“In addition, this musical has great, upbeat music and features an ensemble cast. Plus it has a good message: love can withstand the strongest storms, cross the widest earth, and survive even in the face of death itself.”

The cast (pictured in rehearsal) is made up of 23 student members. Leads are Cameron Catalano as Ti Moune and Evan David as Daniel Beauxhomme. Featured characters are Grace Poat as Asaka, Goddess of Earth; Alexander Summers as Agwe, God of Water; Annie Roumeliotis as Erzulie, Goddess of Love; and Julius Henkin as Papa Ge, God of Death.