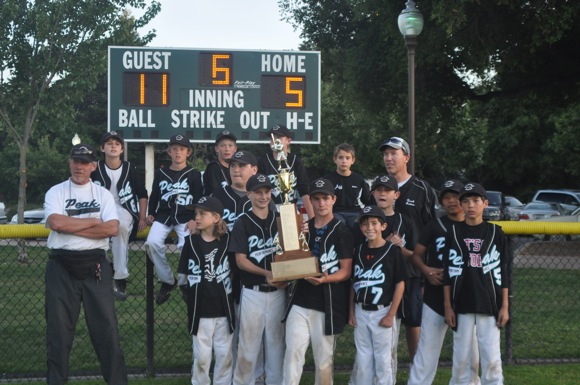 It was a hitter’s game at the Menlo Park City championship Little League game Friday at Burgess Park.

Peak Performance Chiropractic from Alpine/West Menlo out slugged Left Bank of Menlo-Atherton Little League, 11-5, to capture the title. It was Peak’s third consecutive appearance in the title game and second title in three years.

The top five hitters for Peak Performance went 12 for 16 and took off for a 4-0 lead in the first inning and continued to build it throughout the six-inning game.

No. 2 hitter Spencer Jenkins led all hitters, going four-for-four with two doubles. No. 3 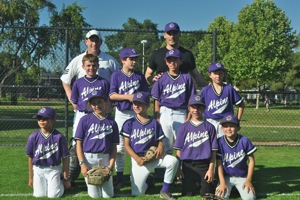 hitter Harrison Armsby hit a three-run homer in the first inning  and added an rbi double while going two for four. Four hitter Bradley Stillman went two for two with 2 rbi and No. 5 hitter Miles Conrad hit two doubles on the way to a three for three performance.

David Farnham supplied the big blast for M-A with a two-run homer in the fifth inning.

Peak Performance finished in fourth place during regular season play with a 14-7 record but went 4-0 in the playoffs to earn a berth in the City Championship.

Left Bank ran the table in the Menlo-Atherton League, finishing league play with an 18-2 record.

The Alpine Minor League team of Draper, Fisher, Jurvetson (pictured above, right) captured a 9-7 victory over the Timber Rattlers of M-A to capture the Minors Division City title.

Veteran sports writer Tim Goode is the editor/publisher of Menlo Park-based NorCal Fishing News, which was selected Best Internet Site for 2011 by the Outdoor Writers’ of California. He’s also long been involved with the Alpine/West Menlo Little League.