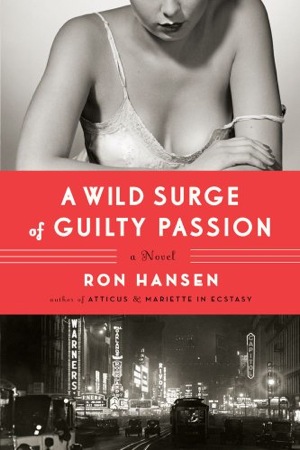 Men behaving bravely, men behaving badly, and sharks.  These are the themes explored in my book recommendations in honor of Father’s Day — guaranteed to provide an escape from the rigors of life in Silicon Valley. Women will most likely enjoy these, too — I know I did — so pack them into summer travel bags or fire up the Kindle.

.)
In 1927, in Queens, New York, a corset salesman named Judd Gray killed the husband of his unhappily married lover — the voluptuous housewife, Ruth Snyder. Their goal was to collect life insurance money and then run off together. The case scandalized Americans in 1927 and sold millions of newspapers. It also inspired the James M. Cain novel Double Indemnity, which was made into a film in 1944.  Author Hansen, who teaches at Santa Clara University has written a wide range of historical novels that may appeal to Dad, including The Assasination of Jesse James by the Coward Robert Ford. Here he recreates Manhattan in the Jazz Age — complete with speakeasies, trysts at the Waldorf Astoria Hotel, corset conventions, and, well, wild surges of guilty passion.

.)
The author of Seabiscuit returns with another brilliant, well written, thoroughly researched account of Olympic runner turned World War II fighter pilot turned Pacific castaway turned Japanese P.O.W. turned triumphant survivor Louis Zamperini. This biography is based on over 80 telephone interviews with Zamperini who is now 94 years old — as well as diaries and scrapbooks of friends and family. Journalist Hillenbrand excels in capturing even the smallest details in spare prose. This is nonfiction that reads like Hemingway fiction.

True Crime: An American Anthology edited by Harold Schechter and published by the Library of America (2008), 900 pages. (Check Kepler’s availability or Amazon.com availability

– no Kindle edition).
The Library of America is best known for its collections of work by great American authors. This is a collection of crime reporting by a variety of authors and journalists. It starts with Governor William Bradford and Reverend Cotton Mather describing hangings at the Massachusetts Bay Colony in the 1600s. It ends in the late 20th century with Dominick Dunne’s description of the Menendez brothers trial. Other authors include Mark Twain, Benjamin Franklin, Truman Capote, Ann Rule, Theodore Dreiser and Gay Talese. According to Bookmarks Magazine, these stories say just as much about America as they do about murder. Adds the Washington Post, “One does not typically look to true-crime reporting for outstanding writing — just the facts will suffice — but there is plenty of class in this volume.”

– no Kindle edition).
Though just 30 miles due west of San Francisco, the Farallones — nicknamed the Devil’s Teeth for their ragged appearance and raging inhospitality — are utterly alien, which may explain why each autumn packs of great white sharks return to gorge on the seals and sea lions that gather there before returning to the Pacific and beyond. Journalist Casey describes the sharks from a social, political, historical and naturalist point of view.

The writer of this post, Lauren John, has long led book groups in Menlo Park and will become library manager at St. Patrick’s Seminary in mid-July.